Learning to Enjoy our Differences

Scientificisch is not an existing word. I made it up.  Let me explain, this is a personal story;

One of my children was struggling in school a lot, which was strange because he was absolutely an intelligent boy. Bit by bit, year by year, we learned that he was a very visual thinker. Which is hard in an educational system based on reading; For him books are a lot of letters combined, which don’t make any sense to him. When he couldn’t picture the information, he was lost and could not concentrate. He felt stupid.

One day, we were talking about the Trees family (family name in this case) from number 10, his brain send him to trees -> forrests -> Alaska -> bears -> hunters -> death bears. Suddenly we had a very angry boy and we’re all completely lost, because we couldn’t picture what he visualised.

We were lucky he had teachers who allowed him to use audio books combined with a real book. From that moment the words he heard and read were making sense he could picture it and he was hooked. Because of the experience with all the words and language he also started reading normal, without audio and is doing pretty well now.

A visual learning will learn the concept of what’s being read or taught, They will think and learn much faster, because pictures contain much more information in an eyesight than words and definitions can ever do; A one second look at a picture gives you more information then words can ever do.

I struggled all the way through high school and I only made it because there were teachers who believed in me.  Economics was my biggest frustration, I understood the principles and definitions very well, but when we had tests and we had to solve a problem I solved the problem by using and mixing all the definitions, and not by repeating the definitions. I like to think that when the economists used my tests, we would not have the economic crisis today.  Anyway I didn’t make it to university because I didn’t fit in the teaching and testing methods. It’s very frustrating to have to work below your abilities. I educated my self in all different cultural and human topics in different cultures and education systems.  Together, in the process with my son, I realised that I wasn’t stupid or dumb either and that the combination of all my gathered knowledge en experiences are worth to tell.
The things I write or tell in this blog are not scientific because I can’t recall how I got that theory/information or ideas because I visualised, mixed and matched all different, theories, experiences and information and formed my own theory.  I call it   SCIENTIFICISCH. 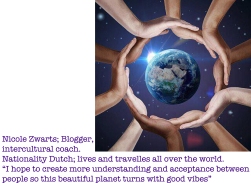 Liking, sharing, following is been apreciated for a real international scope.