Learning to Enjoy our Differences

I’m a white person (no worries I’m not offended, as I am white and I like my cheese too, so no offence if you call me cheesehead) who are a minority in Qatar.
The new scold word seems to be ‘being privileged’, I’m not offended as I think I’m lucky indeed. But the negative tone in which it has been said hurts, as if I’m a bad person being priviliged?!

My children are few of the privileged people who pay a lot of money to join a service trip in Africa, helping to build a school. Take my word, you can have a luxury family holiday instead.  Service wise I don’t think the children are much of a help, but they learn something out of the experience. Most of all that it’s all about money and not so much about interaction or coming together.
My daughter came home very confused.  During the trip, there was one moment the children were allowed to play with the kindergarten children and speak english with them.
All the little girls wanted to sit on my daughter’s lap and touch her hair, she’s got long blond hair, you must know.
She asked the girls why they wanted to sit with her all the time.
A: “Because you look like an angel”
“I’m not and I think YOU look like an angel”
A:“No I’m black” My daughter was only 15 years at that time and the girl 5 or so, she was flabbergasted and very frustrated
“Mam, what on the …….. can you do when people have such a low self-image?”

In the psychology there’s a theory that says that what you say/believe/think/convinced of, tells a lot about yourself.

When people point at me that I’m priviliged, they put themselves, in a roll of accuser or victim at the same time.
Like the theory of mr. Karpman says, it will become a drama when I want to save them. Because, I can not change a situation, at most I can help out in certain situations, using my talents and skills (i.e. sending in money via my daughter) but I can’t save anybody from their own believes/thoughts or convictions and I can’t help somebody who keeps accusing others or pitying themselves.

“What can you do…..?”
“Believe you’re an angel and if you want I would love to try flying together” That might have been an answer.” 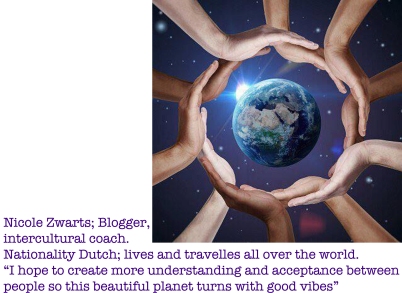